The Through Line of Action

Where Crosspoints fit with the Stanislavski System.

HomeThe Through Line of Action

Where the Crosspoints fit with Stanislavski

I’m not one to promote the totem worship that can (at times) be part of a career in teaching acting. Actors and teachers alike tend to brand themselves as Strasberg, Chubbuck or Adler actors, etc. In spite of this, actors must create their own processes, uniquely assembled for the work at hand and empathetic toward the originators of the methods being used.

Stanislavski dedicated his life to developing his System and the Method he created for his style of theatre. As a result, he’s revered because of the monumental focus and effort involved. Equally admirable are all those who extended Stanislavski’s work, challenged it, fragmented it and interrogated its shortcomings.

The Difference Between the Method and the System

A major point to consider is the difference between Stanislavski’s Method (which describes techniques for breaking down a script and building a role) and the System (which describes the entire process of preparing one’s body and mind for performance). The Method is a set of rules and principles. Because of this, it’s comparable to techniques of woodworking. Like woodworking, the method outlines consistent quality and excellent craftsmanship. Conversely, the System is more like the principles of engineering (https://link.springer.com/chapter/10.1007/978-3-319-16172-3_8). It supports every potential idea when you consider the actor’s Body, Mind and Will in the act of performance. Taken this way, the System describes a broad range of performance traditions.

What a System Does

Because systems are meant to organise a large amount of thought, they’re more abstract and go “deeper” into the various elements of a practice. A system describes what could be made, rather than what to make and how to do it. To help illustrate this point, here’s a distilled list of the main features of the System. It outlines values such as;

The elegance of the System is that it describes what is quite obvious in almost every performance culture. Consequently, it could describe a modern dance performance by Martha Graham, a Laurel and Hardy comedy sketch, Grotowski‘s avante garde theatre or a Marlon Brando monologue.

Conversely. Stanislavski focused on “Socialist Realism,” confined by his professional position. The System serves the Aesthetics of his country’s performance style. However, his System deals with experiential and embodied process of performing, outside the genre and style of performance. As a result, it has a more general application, addressing everything an actor does beyond textual analysis.

To illustrate this, Stanislavski made the following diagram. 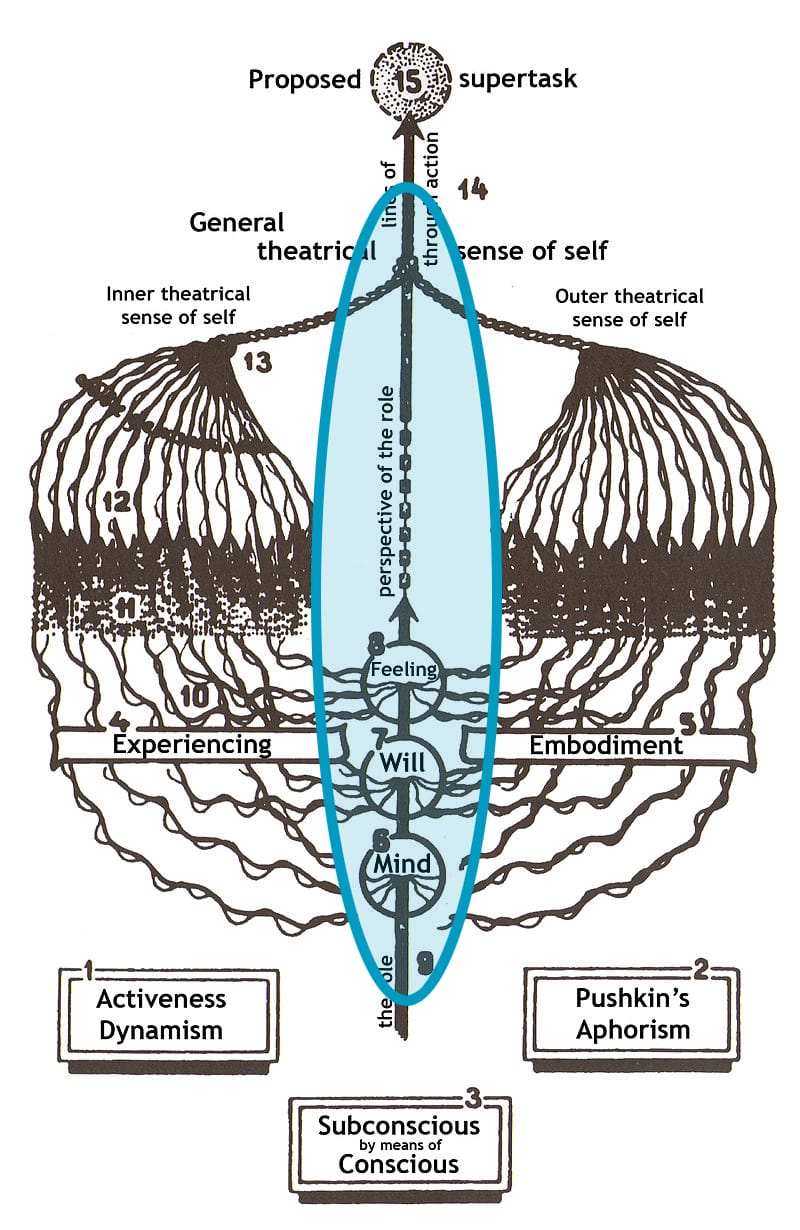 A diagram of Stanislavski’s “Plan of Experiencing” (1935), showing the inner (left) and outer (right) aspects of experiencing and embodying a role. The blue shaded area represents the role that Crosspoints takes in the system. Original diagram from Wikipedia (accessed Jun 2021).

At the bottom are the three guiding principles of;
Being active and dynamic
Accessing the subconscious by way of the conscious
Finding truth within the aesthetic framework of art

Above them are the three aspects of the actor’s being that give energy to the entire system. These are the actor’s Will, Mind and Feeling (meaning both the senses and emotion).

They feed out in three directions.

To the left are experiential practices like fully imagining the circumstances, taking actions within each bit of a story, exercising concentration and belief. A well trained imagination produces Experience. Through this the actor achieves the inner sense of self in the context of performance.

To the right are modes of embodiment. They’re the concrete physicalised aspects of Experience. On this side are things like walking, balancing, dancing, singing and using speech/diction well. A well-trained body produces expert Embodiment. Through this, the actor arrives at an outer sense of self in performance.

The two senses of self (inner and outer) combine into a sense of embodied psychological/emotional being. It’s a combination that Stanislavski called a “psychophysical” state.

Up through the middle, like the spinal column of a medical diagram, is the perspective of the role. This is the lens that focuses all of the previous elements. Following the perspective of the role, the actor arrives at a unified sense of performing with a purpose that is a product of the story. This through-,line of specific choice yields the purpose inherent in the role, or as Stanislavski called it, the “Supertask.”

Like many who teach what acting curricula often call “creative movement,” the work I do has often been pigeonholed by those who view movement as a “supporting skill.” Like dance, stage combat, voice and diction, the movement component of Crosspoints work might reduce to skills-as-craft. However, there is more to it.

Movement and vocal expression don’t simply aid your performance, they are your performance. Likewise, Crosspoints is a “way in” to the raw components of a character, giving you a temporary way of seeing the world that aligns with what Stanislavski calls “The Perspective of the Role.”

Crosspoints work starts with general Image Studies which promote active, dynamic exploration. The studies enable you to access your subconscious by way of the conscious.

From there the Crosspoints get more specific, incorporating Emblematic behaviours (with choices about Eye Focus, Emotional Rasas, and Archetypal Partners). The all-important, central structure of a role comes from these combinatorial studies. They produce a foundation upon which to construct the character and their story.

At the top of Stanislavski’s diagram is a combination of perspective with experiential and embodied knowledge. They constitute the “theatrical sense of self” and end up being a fusion of the actor’s entire preparation.

Preparation incorporates the methods of Experiencing (circumstances, beats, etc.) With methods of Embodiment (posture, coordinated movement and voice) and intertwines all of it with the Perspective of the Role. For this part of your work, the Crosspoints offer another kind of practice; The Source Room.

Source Room as the “Combiner”

With this in mind, the Source Room practices enable you to develop the arc of the character according to the text. In Crosspoints, you can create the Emblematic Images that represent each stage of the character’s evolution through the story. There’s the Unevolved self, the Obstacle self, the Gateway self and the Evolved self. In a complete dramatic arc, your character will likely pass through all four of these primary Emblems.

Generally speaking, the four primary Emblems, outline the supertask (derived from the script). One way of thinking of it is to imagine your character’s supertask as “true north” on a compass, leading to the Evolved Self. The other three directions are detours.

Points on the Through Line

Frequently you will note the direction that the story leads a character, you start from an Unevolved state. Meeting the obstacles of the story stimulates the Obstacle self (the reason why the character has never gotten further in their life so far). The Gateway self is the character’s one lucky realisation that changes their fortune, leading them to evolve. From there the character charges into their Evolved self.

Within your process of creating a role, Crosspoints can support other tools. For example, you can still analyse the script for beats or construct the given circumstances. With this in mind, these practices simply help you make them more of an experienced analysis than a literary one.

As a result of working with Crosspoints over the years, I am constantly encouraged by the results actors get from the work. It’s especially evident when it leads them to a personal energy or inner momentum that they might not have found using text analysis alone. They then take what they found to the other methods.