The Art of Self-Deception

Performance as a Noble Lie (and its Opposite).

The art of self-deception is deeply ingrained in our psyches and cultures.

There are studies in evolutionary biology that propose our propensity for lying stems from the fact that we are social animals. There is an evolutionary benefit to being able to lie. Baboon troops tend to have complex, hierarchical social structures. A product of this hierarchy is that the highest status baboons have offspring who feel entitled to the same status.

Imagine a group of mid-status baboons enjoying a desirable sort of food. A higher status child baboon comes by and wants some of it, but knows it is outnumbered. In such circumstances, the high-status child baboon will make a distress call, signaling that it’s under attack. As a result, the high-status mama-baboon comes thundering in and chases all the lower status ones away. Consequently, the tasty food is available for the young, lying, little brat-baboon.

We share many traits with higher primates like these. It may be here, in this act of deceiving others, that we nurture the art of self-deception.

The Masks We Wear

If humans have an evolutionary predisposition to lie, then it is a small step to realise that the best way to keep a lie consistent is to lie to yourself.

Lying to ourselves is more deeply ingrained than lying to others.
― Fyodor Dostoevsky

Self-deception is a recognised psychological phenomenon. It stems from our basic need to think well of ourselves in spite of our numerous flaws, failures and bad habits. We reconcile our need for a positive self image with our shortcomings by hiding them from ourselves and others.

Unfortunately, we tend to be more successful at tricking ourselves about our flaws than we are with those around us. They can usually see them, but help us maintain our deception. This act of lying to ourselves about our own character is called “self masking.”

Self-masking is perfectly normal and, for the most part, harmless. However, the counterpart of self-masking is “external masking.” This is where we deny external influences that may threaten to expose our internal masks.

For example, a person who thinks they are well-liked may ignore signals from the outer world and advice from others that they aren’t.

The shaky ground upon which we build our self image is a “noble lie.” It is normally harmless and part of a healthy social life.

However, when we flaunt reality too much, we become something like a person walking across a deep chasm on a poorly constructed bridge. Leo Tolstoy used this metaphor in Anna Karenina (1878) where he wrote “That chasm was life itself, the bridge that artificial life.”

There is a risk that the bridge will break and we will tumble into the chasm of life itself. This would be a confronting, annihilating experience if we have become too invested in our masks and have no experience of life outside of them.

Performance as a Safety Net

I view all performance as having to do with life itself, but couched in a lie. As we go through life, exerting the effort of performing the noble lies (both good and bad), we need one of two forms of relief. We’ll need to have our lies reinforced occasionally, in ways that make us happy and lighten our burden. However, performance will also nudge us once in a while, giving us a shot of “life-itself” and a new perspective on our self-deceptions. If it’s effective, it will suggest we take the mask off. In which case, we tend to grieve; a bit for the loss of our creation and a bit for our own foolishness.

David Mamet suggests that the purpose of dramatic writing (and by extension, acting) is to relieve us of the burden of our consciousness. This is an idea I stand behind 100%. Even the grittiest, most scouring drama is engaging because it displaces its audience from its daily burden. Furthermore, it happens within the relatively safe environment of another, mutually supported lie. It’s like a small virtual simulation for “morality and lie” analysis. 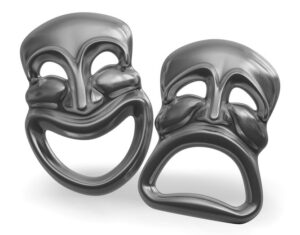 The Masks of Comedy and Tragedy.

The masks of our lives are either reinforced or challenged. The art of the stage and screen is an extension of our carefully conceived art of self-deception. It gives me a new perspective on what the symbol of acting means. The masks of Comedy and Tragedy have represented “acting” since the time of the ancient Greeks. However, instead of symbolising the masks worn by performers, they’re actually the masks worn by the audience.

REFERENCES
The Psychology of Self-Deception, by The Academy of Ideas, YouTube, 2017.

The Pattern Behind Self-Deception, TED Talk by Michael Shermer, YouTube, 2010.