The difference between an acting systems, methods and techniques might be more significant than you thought.

This article might seem academic and abstract to many people. I hesitated while posting it because I thought it was too heavy for most actors who might not even care what I’m ranting about, but then again, that’s the point of this piece! I feel that it helps address a problem with acting methods nowadays. We’ve gone too far down one particular path; we tend to snap straight into script analysis – snipping away at it and making cerebral choices without tapping into the “gestalt,” or the whole-experience of the work.

Whether you’re an actor on a stage or on the screen, one problem is that we live in a different culture than was around in the last century, which is the period when the great teachers like Stanislavski, Adler, Meisner, Strasberg and Hagen created our most-used acting methods. In the time of Stanislavski, it was a literary culture. As a result, the plays of the time followed literary rules of unity and rational cause-and-effect.

Throughout the 20th century, film created a visual culture. Language receded as images became more dominant in our storytelling. Eventually global culture began to adopt the ‘grammar’ of cinema. We have a nearly universal understanding of visual metaphors. We get what a cut means and how various forms of Montage work.

Fast forward to now. And our literary, script-centric methods can seem stifling. Actors try to understand a character from what’s written on paper. It’s easy to forget to tap into your senses and experience everything around you as part of the character so they are someone real rather than a formulaic puppet, with words sewn into their mouth.

The script-forward methods have one crucial point of failure – the script. What happens if you’re auditioning for a casting director and the sides don’t have enough for you to go on? Many actors have faced this problem.

For example, I have a friend who has a recurring role for a couple of seasons in the new Lord of the Rings series being shot in New Zealand. When he auditioned, black felt marker obscured a great number of the lines. He asked who he was playing. The response was, “Can’t tell you.”

“Can’t tell you that either.”

This is a pretty extreme example, and to be fair, NDAs have to be observed when there’s so much investor money riding on productions these days. However, there are plenty of times when any sort of script can fail to deliver a workable picture of a character.

We’re not a text-oriented culture anymore. Writers don’t use their words the way they did in the past. We don’t expect to understand those around us solely by what they say.

When was the last time you thought to yourself, “Oh, I should journal about this for my memoire.” You probably filmed it on your phone with some filters and a boomerang effect, then posted it on TikTok or another platform.

We innately understand that behaviour, experiences and interactions comprise our personalities more than our words do.

I don’t mean to paint the text as old-fashioned or as ‘the enemy.’ Quite the opposite, in fact. It’s just not the only thing we should be working on.

This brings us back to the opening thoughts on acting systems, methods and techniques. We’ve gone too far down the text analysis path and forgotten some of our primal roots; as storytellers, as jongleurs, as architects and purveyors of experiences.

It’s interesting how much our profession has changed over the last hundred years from telling stories in a linear fashion, to filming out-of-sequence and creating fragmented, multi-threaded experiences like immersive stories, games and performance art.

This article is going to make you think differently than most of my other ones. Hopefully you’ll look more deeply into what tools we are using! I hope to promote a new way of seeing three simple words; Method, Technique and System. How do they relate to each other? This might seem like we’re talking about the same things. Even the dictionary uses the words interchangeably in their definitions.

However, if we think about this realistically, we tend to categorise things based on their qualities. Then we start seeing subcategories, which inherit the assumptions of the parent category. For example, there’s the entire Animal Kingdom, but inside that, there are subcategories for mammals, reptiles and birds.

Then there are further subcategories that divide, for example, the plant-eating mammals from the carnivorous ones, and so on. As we get more refined about our knowledge in a discipline, it becomes harder for us to consider other ways of thinking.

We can see Systems, Methods and Techniques in the same way. The most general category is a System. Methods are a bit more refined. Then there are Techniques which are “super-refined.”

Instead of organising animal species like in the previous example, we’re looking at all the ways we have to create a performance. How do our methods and techniques direct our thoughts? Do they restrict what we’re able to think and do? What do they help us do better? What do they make more difficult?

How can we get back to the original raw materials of performance and reconnect, or rewire them into new approaches for new kinds of work? 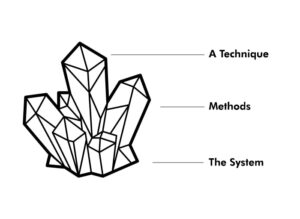 A crystal formation is a metaphor for acting systems, methods and techniques.

In a chapter I wrote a couple of years ago, I used the metaphor of a natural crystal formation to make my point. When a crystal formation starts out, it’s an unorganised hot soup of raw elements. This unformed liquid state is much like any body of knowledge. When the molten raw elements begin to cool, they self-organise and begin to separate.

This is the most general kind of organisation; the System.

The base-level mixture of elements is equivalent to system-level thinking in any discipline. It organises things just enough so a person can use and manipulate them. If you think of the numeric system. It has symbols that allow people to do math. It’s just organised enough to label the digits zero through nine. It doesn’t tell us exactly what kind of math we should do.

A similar, base-level organisation of ideas can be found in Stanislavski’s work. His system identifies the raw elements of dramatic acting such as the “experiential” and the “embodied.” He divides the actor’s work into types of exercises and then he maps out how they flow together. It’s unfortunate that people associate his work with a fixed set of acting exercises. His intention was to map out a much larger creative field.

Another kind of System is The Six Viewpoints of Mary Overlie. Overlie labels the fundamental elements of performance, like Shape, Space, Time, Emotion, Movement and Story. This allows the artist to name and work with the elements in ways that may have remained unknown because there were no words for them before.

The way you work with the labeled elements is through a Method.

Going back to the image of a crystal formation, the elements cool down more and they extrude from their common origin. They individualise and form a crystalline shape that is repeated throughout the formation. This image represents how methods create set ways of working. They also tend to be copied as people assume that the Method is the best and only way to work.

It’s at this point where problems tend to receive the same kind of solution no matter how different they may be.

Similarly, a method like Stanislavski’s might tell you how to break the script down into beats of action. It might have exercises and aphorisms that reflect the System, but these are not a complete picture of it.

In essence, Methods are simplified expressions of a much larger System. They’re derived and constructed for specific tasks. They give the artist the tools for consistent success, but they also narrow choices and the possibility of invention.

Methods can become so refined and replicated that they eventually become Techniques.

The “highest” level and most individualised part of a crystal formation is at the end of each crystal. There’s a sharp point that represents the most specialised organisation of the elements, but it’s also furthest from the source.

A Technique is a highly specialised version of a Method. You might have heard the saying, “When you have a hammer, every problem looks like a nail.” This refers to how specialised knowledge has limitations and preconceived conclusions, limiting your imagination.

As far as acting systems, methods and techniques go, the Crosspoints are an Acting System. They’re oriented to the less structured, source-level aspect of your creative imagination. They give you a few prompts and guidelines to rediscover your creativity. By using the Crosspoints System, you can work with quality and consistency in an immersive environment that allows for experimentation – creating new methods for yourself along the way.

You’ll be able to reconnect with source materials and raw elements which you may have missed if you’ve been following well-established techniques. If this sounds interesting to you, please contact us! We offer courses on how to get the most out of Crosspoints so you can grow as an artist every day.